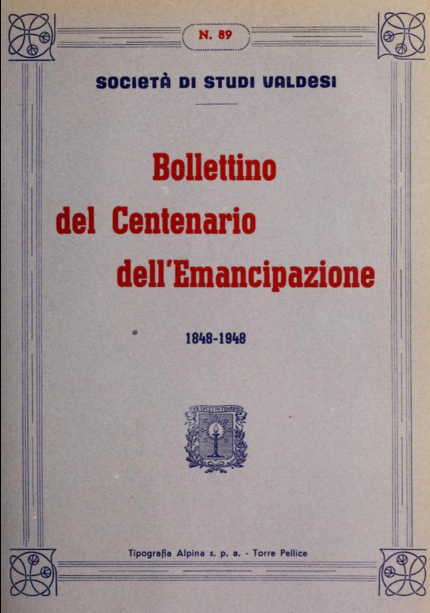 Historical research has been the common thread running through the activities of the Società di Studi Valdesi [Society for Waldensian Studies] since it was founded in Torre Pellice in September 1881. Its aim was to promote study and research in the history of the Waldensian movement and the Churches that arose out of the Protestant Reformation. In May 1884, the Society ‒ at that time called Société d’Histoire Vaudoise ‒ published its first Bulletin, the Bulletin de la Société d’Histoire Vaudoise, in French, the language in which the Waldensian world expressed its identity. The founding members resolved to gather material to archive, carry out topographical and linguistic studies of local dialects, collect antiquities and popular songs, and study customs and traditions.
The Society came into being as an independent association outside church institutions. Over time, this aspect would become the distinctive feature that made it possible to engage in dialogue with lay society, the Catholic world and Protestant culture in its many expressions. The publication of documents and memoirs, in particular following the celebration in 1889 of the bicentenary of the «Glorieuse Rentrée», would make the Bulletin into a mine of unpublished documents and a research laboratory from which emerged in 1894 the first substantial work of history, the Storia dei Signori di Luserna [History of the Lords of Lucerne]. Written by Pietro Rivoire, it was the fruit of digging deep into the archives. At the end of the nineteenth century, the Bulletin began to have as one of its collaborators also Emilio Comba, Waldensian pastor and eminent historian, who regenerated the study of Protestant history in Italy. Later on, other Waldensian historians like Jean Jalla and Arturo Pascal would trace the outlines for a proper “Waldensian historiography”.

Though a review confined to the small world of the Valleys, from its very beginnings the Bulletin was open to exchanges with other Societies, both in Italy and abroad, in particular France, Great Britain, the United States, and Germany. This explains why at the end of the nineteenth century the Società di Studi Valdesi set itself the goal of involving on the editorial side of the review not only professors at the College of Torre Pellice, but also academics from outside the Valleys who could give a new boost to study and research. In the meantime, concurrently with the evangelization of Italy that broadened political and religious perspectives, the question of language emerged as was apparent in the growing number of articles written in Italian.
Under compulsory Italianization during Fascism, which affected above all German-speaking South Tyrol, Aosta Valley and the Waldensian Valleys, the use of French was banned in local schools but tolerated in religious worship and teaching. In this climate it is understandable that in April 1934, without any official explanation the Bulletin became the Bollettino della Società di Storia Valdese. It needs to be remembered that in the same year the Ministry for Press and Propaganda was set up, which did not look favorably upon publications, especially local ones, in languages other than Italian. Then in September 1935 the Society was forced to become the Società di Studi Valdesi, as explained in an embarrassed preface in the Bollettino citing the decision of the Minister of National Education, Francesco Ercole, “aimed at coordinating the activities of the cultural Institutes subjected to the protection and supervision of the State and, where necessary, to make them run more efficiently, as well as bring the aims of these Institutes increasingly more into line with the requirements of the Nation’s new spiritual climate.” 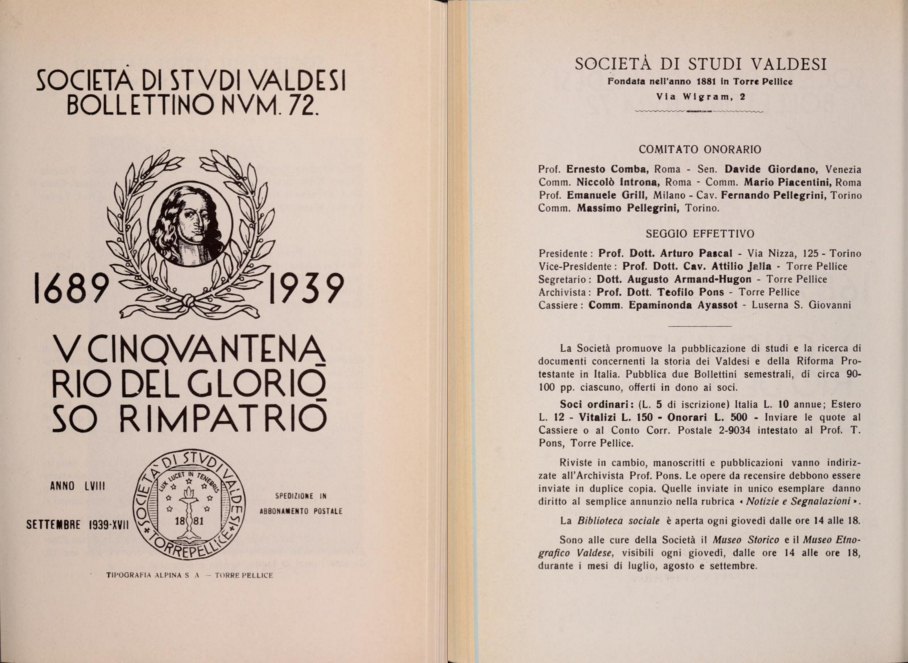 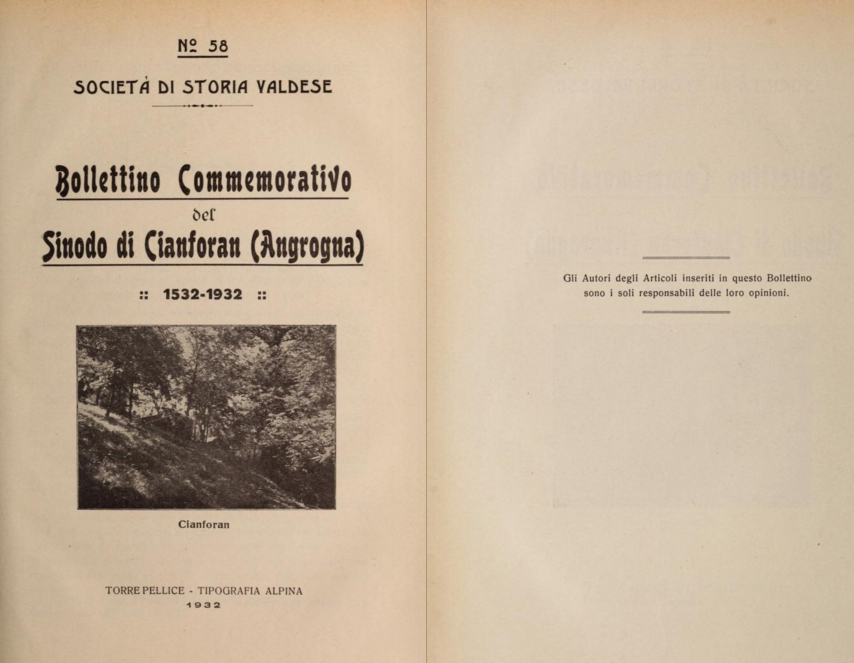 The Society and its Bulletin were now under the control of the Fascist state, which imposed the change in name so as to curb, at least formally speaking, its independence: no longer Società di Storia Valdese, expressing a too specific identity, but the more generic Società di Studi Valdesi. The ‘Giunta Centrale per gli Studi Storici’ [Central Committee for Historical Studies], which centralized the organization of the Historical Institutes and rigidly regulated the delegations for the history of the nation, traditionally independent, was nonetheless more tolerant towards the Society: “The Società Storica Valdese may continue its activities as an independent body provided that it assumes the name of Società di Studi Valdesi,” notice of which was given by the Prefecture on 6 April 1935. Likewise, in 1938, L’Echo des Valleés, newspaper of the Churches in the Valleys, was shut down with the following motivation: “It maintains a generally uninvolved or hostile attitude towards the regime and engages in propaganda to spread the French language among Italian citizens.” In 1939, after long negotiations L’Eco delle Valli valdesi came out in Italian.
Also during the Fascist period the Società di Studi Valdesi did not change its aim or nature, confirming its desire to promote “the publication of studies and the search for documents on the history of the Waldensians and the Protestant Reformation in Italy. In addition, it incorporated onto its executive board – Il Seggio – well-known figures in historical research like Arturo Pascal or, in the 1940s, professors from the Waldensian College such as Augusto Armand Hugon. In the postwar years, the young historian Giorgio Spini began his collaboration with the Bollettino, while in the pages of the review the name of Delio Cantamori appeared, the mentor for a generation of historians who investigated the many diverse experiences during the religious Reformation in Italy in the 16th century uninfluenced by the Churches or attachment to a religion. Later on, interest began to be shown in the writings of Franco Venturi, the great historian of the Enlightenment in the tradition of Italian lay culture.

A transition that would become decisive took place at the Assembly of 3 September 1945, when a Day of Waldensian Studies was proposed “in which one or more historical, philosophical or literary topics were to be presented and discussed that related to Protestant thought and would give rise to a fruitful exchange of ideas.” It was the start of an experiment that would turn into the Conferences on heresy and Reformation in Italy, subsequently entitled “Conferences on studies in Reformation and religious movements in Italy”, to be held immediately following the Synod. They would become a regular event for Italian and other historians of all tendencies. First of a series that reached its 58th edition in 2018, the Conference of 1957 was organized on the initiative of Giorgio Spini and Augusto Armand Hugon. Among the participants were Eugenio Dupré-Theseider, Giovanni Gonnet, Delio Cantimori, Salvatore Caponetto, and Giorgio Spini.
Connected with the choice of Conferences as the place for discussion between various historiographical perspectives, a profound change in the review occurred due above all to the Society’s president, Augusto Armand Hugon. He encouraged the collaboration of students of the Middle Ages like Amedeo Molnàr, historians such as Luigi Firpo, Giuseppe Ricuperati, Franco Venturi, Robert M. Kingdom, Adriano Prosperi, Antonio Rotondò, Albano Biondi, and Ugo Rozzi, and specialists in French studies like Enea Balmas, who joined together with those studying the history of the Waldensian movement. As a result, this new season for studies was reflected in the Bollettino, which opened its doors to themes and tendencies going beyond the confines of Waldensian history in the narrow sense. 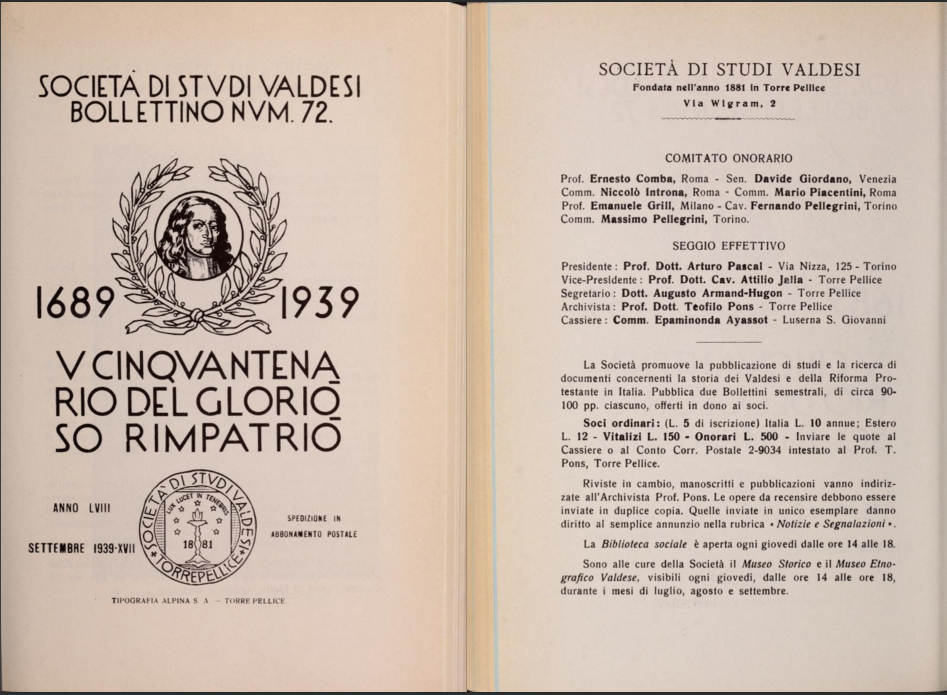 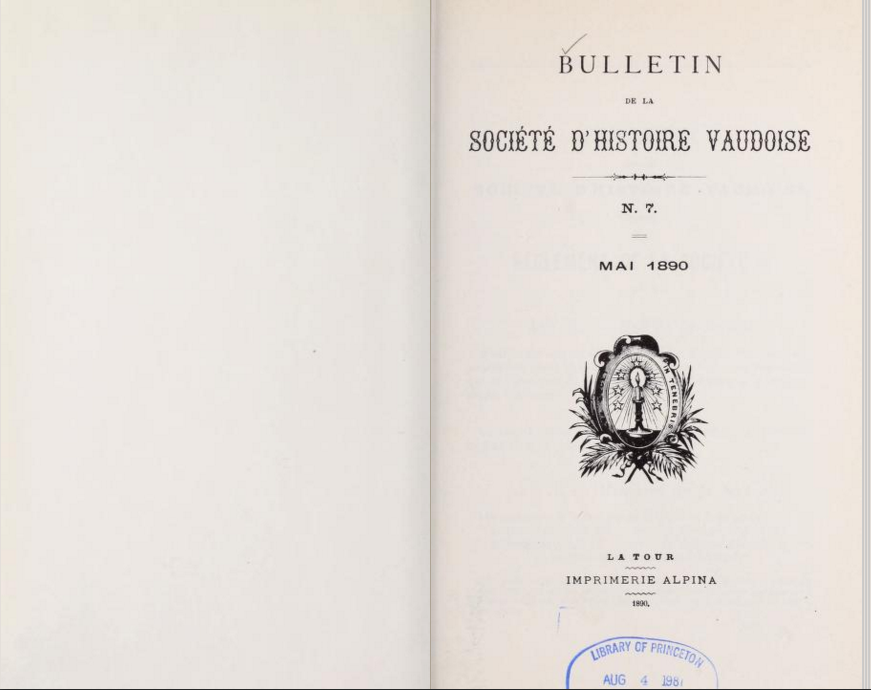 In the 1970s, the Bollettino began to acquire a more stable structure with reviews and bibliographic notes, and an Editorial Committee. In the following years, a Scientific Committee took shape and opened up definitively to the by now numerous researches within Italian historiography into the many expressions of religious dissent which, far from passively assimilating Protestant doctrines, had developed original views on reform.
In that same period, the Society began to hold conferences centered on specific themes – “Heretics and medieval heresies in contemporary historiography”; “Geographical and religious frontiers in Italy; “Factors for conflict and communication in the XVI and XVII century”; “The sword and the Cross: chaplains in the two world wars”. The publication of the proceedings of these conferences gave the review ideas for discussion and further publications. The history of the medieval and Waldensian heresies was also enriched by new inputs, while contributions were beginning to be submitted to the review from young researchers working within a timespan from the Middle Ages to the contemporary age.

Since June 2017, the year of the five-hundredth anniversary of the Protestant Reformation, the Bollettino has changed its name to Riforma e movimenti religiosi. Rivista della Società valdesi [Reform and religious movements. Review of the Waldensian Society]. The new title aims to be a clear manifestation of the broadening in perspectives which had already been the wish of that group of intellectuals from Waldensian Valleys who had taken on the venture of the Bulletin. Following in the footsteps of this fertile tradition, which has had the force to expand thanks to its pluralist approach, and far from diminishing the identity of the Società di Studi Valdesi or even less the historical nature of its review, Riforma e movimenti religiosi will be able to continue to provide a space for debate open to the keenest voices in research.
That, at least, is what we are hoping for. 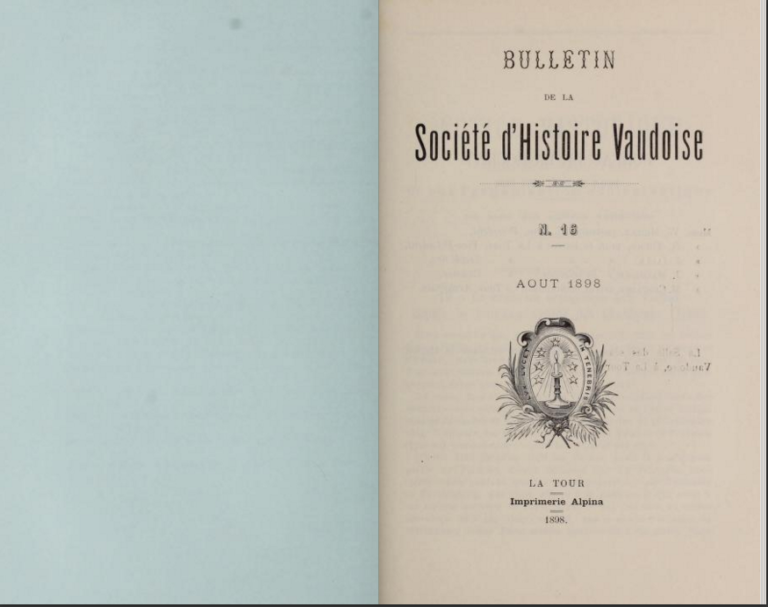